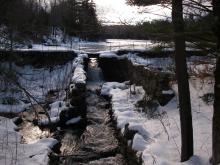 Routes 116 and 112 join just west of Ashfield center.  A mile south, where 116 turns west on Spruce Corner Road, it enters the Westfield River watershed, and remains there for about 9 miles, past Plainfield center, until it nicks a corner of the Deerfield again at Plainfield Pond. Plainfield Pond drains into King Brook, which enters Hallockville Pond ½ mile later, then runs north along Route 8A for about 2 miles, where it joins the Chickley River, which enters the Deerfield in Charlemont.

Once past Plainfield Pond, the Deerfield River is in the rear view mirror, as Route 116 enters the Hoosic River Watershed, and remains there until 116 ends in Adams.

Show All Tours
Show All Stops